SWOOP AND SOAR: How Science Rescued Two Osprey Orphans and Found Them A New Family In The Wild

Swoop and Soar, two baby osprey chicks, are safe in their nest at the top of the forest, until a powerful storm sends their tree crashing to the ground. This is the true story of how science found these two chicks a new osprey family and home in the wild.

Only ten days old, Swoop and Soar become orphans when their nest is shattered in a thunder and lightning storm. Raptor biologist Janie Veltkamp, who rescued Beauty the bald eagle, helps save the young osprey chicks and sets out to find them a new family. In a race against time, Janie finds the perfect new nest for the chicks, with wild osprey parents who have also  lost chicks to the storm. But will the new parents accept Swoop and Soar as their  own, or soon fly away from the nest forever?

After quickly nursing the baby brother and sister back to health, Janie carefully places them in the new nest while the osprey parents are out hunting for fish. Then Janie waits, watches and hopes. The new father brings back a fresh fish, but four long hours go by until the mother lands at the nest. Will she feed Swoop and Soar, and shade them from the Sun’s burning rays with her outstretched wings? Can the chicks and their new osprey parents now become a real family?

Deborah Lee Rose is an internationally published, award-winning author of many beloved children’s books. Her book Beauty and the Beak: How Science, Technology, and a 3D-Printed Beak Rescued a Bald Eagle is a CALIFORNIA READS recommended title of the California Teachers Association. Jimmy the Joey: The True Story of an Amazing Koala Rescue is a Reading is Fundamental/Macy’s Multicultural Collection title and Notable Social Studies Trade Book for Students K-12. Into the A, B, Sea was named to the NY Times 100 Books to Read and Share. Deborah helped create and directed communications for the ALA/AASL award-winning, national STEM education website Howtosmile.org, and helped created STEM activity apps for Lawrence Hall of Science, which have been downloaded more than one million times. She also served as Director of Communications for Lindsay Wildlife Experience, which includes the first wildlife rehabilitation hospital established in the U.S. Deborah lives in Silver Spring, Maryland, and speaks at book events, conferences, schools and libraries across the country. Visit her website at deborahleerose.com.

Jane Veltkamp is a raptor biologist and rehabilitator, wildlife educator, trained nurse, and master falconer. She led the team who developed Beauty the bald eagle’s prosthetic beak and has lifetime care of Beauty, on which Beauty and the Beak was based. Jane is founder and executive director of Birds of Prey Northwest in Idaho, a raptor center which educates the public about raptor conservation, including through live raptor programs, and has provided medical treatment and rehabilitation to thousands of injured birds of prey to return them to the wild. She spent ten years of her career reintroducing ospreys and peregrine falcons to regions where they had disappeared from their habitat in South Dakota and Indiana. She rescues and cares for bald eagles, including Beauty, by permit from the U.S. Fish and Wildlife Service. Jane lives near Coeur d’Alene, Idaho, and is also the eagle expert for the Coeur d’Alene Tribe’s Native American Aviaries. Visit her website at birdsofpreynorthwest.org.

There are no reviews yet.

Be the first to review “SWOOP AND SOAR: How Science Rescued Two Osprey Orphans and Found Them A New Family In The Wild” Cancel reply 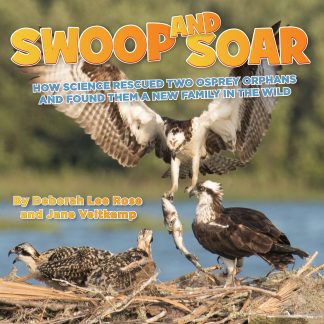 You're viewing: SWOOP AND SOAR: How Science Rescued Two Osprey Orphans and Found Them A New Family In The Wild $16.95
Add to cart
0