View cart “Do Jellyfish Like Peanut Butter? Amazing Sea Creature Facts” has been added to your cart.

Does A Fiddler Crab Fiddle?

Co-authored by award-winning writer Corinne Demas and her science-savvy daughter, Artemis Roehrig, and illustrated by John Sandford, Does A Fiddler Crab Fiddle? will have everyone claw clapping loudly for fiddler crabs!

With its author’s note providing more information, Does A Fiddler Crab Fiddle? is an outstanding nonfiction picture book for children ages 4-8.

Does A Fiddler Crab Fiddle? No! But fiddler crabs sure do some amazing things!

Using this question-and-answer format engages children immediately, and discovering just what fiddler crabs actually do satisfies their curiosity. This is the best kind of nonfiction – engaging, fun, and filled with the kinds of details that kids love.

John Sandford has worked in children’s publishing for more than 30 years and has spent the last seven years as an art director with Cricket Magazine Group/ePals Media. Sandford’s work has garnered starred reviews from Publishers Weekly and School Library Journal, CBC selections, and a Parent’s Choice Gold medal among other honors. John lives in Chicago with his wife Frances, and daughter Eleanor.

“The humor is irresistible, and Sandford makes good use of it in his paintings…Cheerful and modestly informative.” 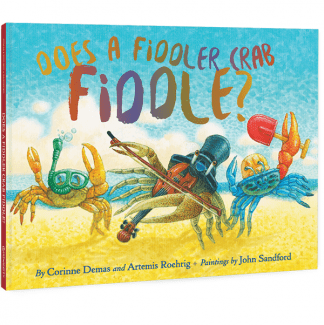