Do bed bugs wear pajamas? Do stink bugs take baths? Do Doodlebugs Doodle? Amazing Insect Facts will have kids laughing as they learn lots of fun facts about insects. Interactive and engaging as a read-aloud, this book is a non-fiction stand-out for children ages 4—8.

Explore the fun and fascinating world of insects through this lively question and answer book. Do dragonflies breathe fire? Do stink bugs take baths? Do bed bugs wear pajamas? The silly questions—the kind kids often ask—are followed by informative answers, sure to make every reader eager to learn more about insects. Kids will delight in this engaging, interactive read-aloud, and educators, parents, and budding naturalists will enjoy the detailed illustrations. With an extensive authors’ note, this book provides an exciting introduction to insects, suitable for any science lesson. Additional back matter on each of the insect species will inspire further study.

Co-authored by award-winning writer Corinne Demas and Artemis Roehrig, who has a background in entomology, with illustrations by Ellen Shi (the Little Frog books), Do Doodlebugs Doodle? Amazing Insect Facts will inspire kids’ curiosity about the world of insects. In praise of the authors’ earlier book in the series, Does a Fiddler Crab Fiddle? Kirkus said, “The humor is irresistible.” Once again, the winning combination of science and imagination makes this a non-fiction stand-out for children ages 4—8.

Ellen Shi grew up in the great state of New Jersey and recently graduated from the Rhode Island School of Design, majoring in Illustration. She loves color, simple shapes and texture. Ellen is also an avid fan of nature, film, and books. When not drawing or painting, you will probably find her with her nose in a book.

“Witty and clever, this charming sequel to Do Fiddler Crabs Fiddle? takes on a whole lot of bugs and has a ball with them…The charm continues with Ellen Shi’s delicious illustrations.” —Jane Yolen, author of Owl Moon, You Nest Here With Me (with her daughter, Heidi E. Y. Stemple)

“Will have kids laughing out loud as they explore the fun and fascinating world of insects.” —Eric Carle Museum 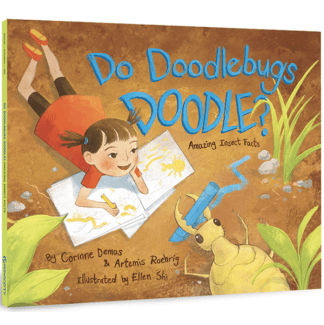