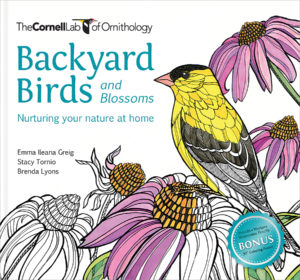 Download any of the 5 pages below to color from our new book: BACKYARD BIRDS & BLOSSOMS 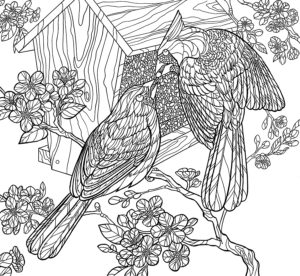 
Have you seen a male cardinal “kissing” his mate? He is offering her food—a gift to demonstrate his value as a partner and provider. Northern Cardinals love sunflower and safflower seeds, and appreciate large feeders, such as hopper feeders, to perch comfortably while they eat. 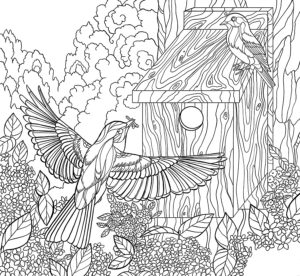 
In spring, attract bluebirds to your yard with nest boxes. Eastern Bluebirds will often raise two broods in a season, and pairs will team up to accomplish this task. While the female is crafting the second nest and laying the second clutch of eggs, the male will care for the fledged young from the first nest. Now that’s teamwork! 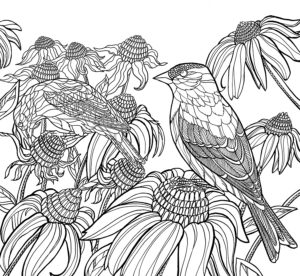 
The sunny yellow plumage of American Goldfinches brightens up any backyard. Did you know that those bright yellow feathers disappear in winter, replaced with more subtle grayish-yellow plumes in spring? Goldfinches only need their bright plumage when they are trying to attract a mate in the spring and summer. In fall, they molt into a duller garb, which is safer because it attracts less attention from predators. 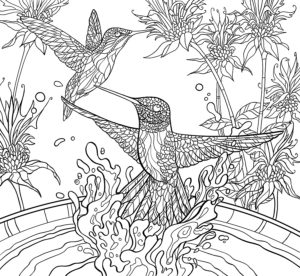 
In the heat of summer, offering a small fountain can provide a delightful source of water for hummingbirds. Hummingbirds typically beat their wings more than 50 times a second, which can work up quite a bit of heat.They will splash in the sprinkles and appreciate the cooling effect.

In fall, huge numbers of blackbirds such as Common Grackles may descend upon feeders. They flock during the nonbreeding season, helping each other find food and evade predators. Despite their abundance, Project FeederWatch counts show us that Common Grackles are in decline. To provide a picturesque food source for blackbirds, let sunflowers go to seed in your garden and watch the resulting feast!